West Ham United are reportedly facing the threat of Portuguese champions Sporting Lisbon in their quest to sign highly rated Mainz 05 defender Jeremiah St. Juste. Portuguese newspaper A Bola reported that Sporting Lisbon has been trusting to sign Juste since the winter transfer window earlier this year and that club officials are optimistic that they can wrap up a deal for the player in the coming weeks. 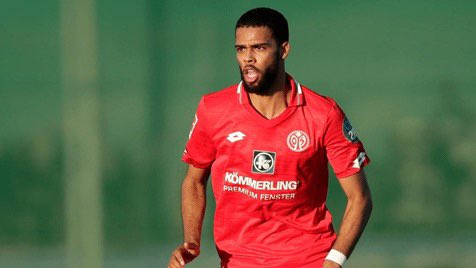 Sporting Lisbon officials are said to be willing to pay around £6.23m for Juste was revealed by the aforementioned news outlet. The interest of West Ham United in the Mainz 05 player was also established.

Earlier this month, Sport Bild journalist Christian Falk revealed that a lot of Premier League teams have their eyes on Juste and the Hammers were confirmed as one of those English top-flight teams.

Juste has earned a reputation for being a rapid defender. Earlier this season, the Mainz 05 defender was clocked at 22.76mph which is the fastest any player has travelled in the German Bundesliga this season.

Europa League campaigners and Champions League hopefuls West Ham United are expected to spend money on a new central defender when the summer’s transfer window reopens in the coming weeks and Juste could be the man for the role in addition to the fact that his transfer fee would be a bargain almost in comparison to the level of the transfer fees being quoted for players nowadays.

For Juste, Leicester City and Newcastle United are also interested in him apart from the Hammers and Sporting Lisbon.